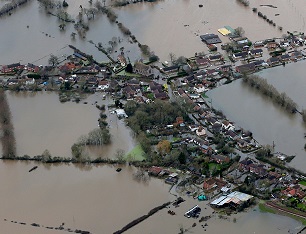 Severe flooding is increasing worldwide at a phenomenal rate

How much is flooding set to increase worldwide in the next 10 years?

Flooding is set to reach catastrophic levels in the near future with the number of people directly affected by it doubling in the next 10 years.

The dire statistics have been published by global research group The World Resources Institute (WRI) which found that 147 million people will be hit by floods from rivers and coasts annually by the end of the decade, compared with 72 million people just 10 years ago.

The cost of damage caused by flooding in towns and cities worldwide is expected to rise massively from $174bn each year to $712bn.

Floods are getting worse because of the climate crisis, decisions to populate high-risk areas and land sinking due to the overuse of groundwater. Hurricanes are stronger, seas are higher and rain patterns are changing, all because of global heating caused by humans.

WRI spokesman Charlie Iceland said: “When WRI first developed its flood modelling tool in 2014 the predictions felt like a fantasy but now we’re actually seeing this increase in magnitude of the damages in real time. We’ve never seen these types of floods before.”

This is why countries worldwide are turning to anti-flood products such as FloodSax (www.floodsax.com) alternative sandbags which can be taken easily and rapidly to the scene of a flood unlike heavy, cumbersome traditional sandbags which need vast warehouse storage and are difficult to move and deploy.

More than 2.5 million FloodSax have been sold worldwide from the USA to Japan and from Sweden to Australia.