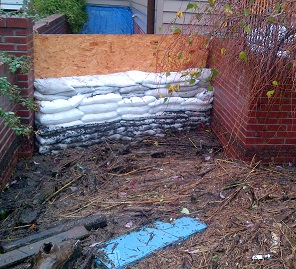 Hurricanes and tropical cyclones are moving more slowly than they did in the past and dumping massive amounts of rain as a result.

Scientists say climate change is to blame and a terrible example of the new slower storms was Hurricane Sally which has just dumped an incredible 30 inches of rain on some southern USA states including Alabama and Florida.

USA environmental experts the Environmental Defense Fund has revealed just how much rain is now falling compared with the past.

Its Associate Vice President of Coastal Resilience, Steve Cochran, said: “While storm surge from hurricanes is often a significant cause of devastating flooding, intense rainfall is increasing those risks, including for communities far beyond the coast. Scientists have found that hurricanes are moving more slowly which leads to more rain dumped over one area.

“At the same time, climate change is increasing moisture in the atmosphere creating greater downpours during hurricanes, thunderstorms and other heavy rain events. In the south-eastern US there is around 30% more rain falling today during heavy downpours than in the late 1950s and the number of 2-day heavy rainfall events has increased by around 60% since the early 1900s.”

Mr Cochran added: “It’s not just hurricanes that deliver excessive rainfall and cause massive flooding — non-tropical thunderstorms and other heavy rain events do as well.

“Our nation’s systems for draining and managing water are antiquated and ill-equipped to handle the new normal of these climate-driven, super-soaker rain events. Streams, rivers and creeks quickly reach capacity, overtopping their banks and flooding communities and businesses that were never previously flooded. The Midwest has experienced several years of back-to-back floods that have devastated communities and crops.”

This heightened flood risk means people in the US must protect their homes and businesses from the risk of flooding so they are prepared 24 hours a day, seven days a week and 365 days a year.

One such way is FloodSax (www.floodsax.com) alternative sandbag flood barriers for flood protection which are space-saving to store and easy to deploy. They are vacuum-packed and resemble a large pillowcase but once they come into contact with water they inflate to weigh 20kg (44lbs) which makes them more effective than heavy, cumbersome traditional sandbags at keeping floodwater out.

More than 2.5 million FloodSax have been sold worldwide, many of them in the USA.

For more on this story please go to https://www.edf.org/blog/2020/09/17/climate-change-dumping-record-amounts-rain-were-not-equipped-handle-it