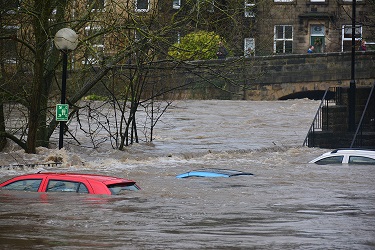 Europe is going to get far rainier in the coming years with flooding from rivers set to become a major problem.

The European Environment Agency (EEA) says climate warming will cause more intense rainfall – up to 35% more in winter – with even drier summers for areas of southern Europe.

It means many communities – especially those next to rivers – face a far higher risk of flooding and so-called once-in-a-century river floods will happen far more often.

The EEA carried out a study on 571 cities across Europe and discovered that in the UK alone 85% of cities on rivers might be facing more floods by the second half of the century.

The study’s lead author Dr Selma Guerreiro, hydrology and climate change researcher at Newcastle University, said: “In a future where our greenhouse gases emissions continue to increase steeply, the most optimistic projections for river flooding see a worsening in the north and especially in north-western Europe. The most pessimistic scenario shows most European cities affected by increases in river floods.”

Dr Peter Salamon, senior researcher at the EU’s Joint Research Centre, added: “Without adaptation measures we are looking at 3 to 6-fold increase in exposure to and damages from river flooding.”

Homeowners and businesses often don’t realise that councils have no responsibility to provide sandbags if flooding is expected. They must protect themselves to avoid the terrible misery of flooding and one way to do this is to have FloodSax alternative sandbags which are space-saving to store and easy to deploy. It means you have peace of mind and are ready for action 24/7 to prevent a flood.

For more on this story go to https://www.euronews.com/2020/04/06/how-can-big-cities-adapt-to-risks-of-floods