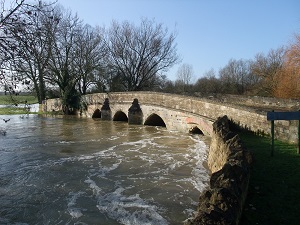 Rising temperatures this week will spark the big thaw as millions of tons of snow turns to water.

Environment officials will be issuing alerts and more serious flood warnings across England and people in flood risk areas are urged to keep checking the Environment Agency website.

But they also need to be prepared with anti-flood devices such as FloodSax sandless sandbags which are easier to store and deploy than traditional sandbags and are used worldwide.

Most councils don’t provide sandbags so it is up to homeowners and businesses to protect their own property. The average insurance claim for flood damage to homes is £4,000.

Over the weekend the Beast from the East roared for (hopefully) a final time but almost a foot of snow settled in some areas with traffic grinding to a standstill and transport networks thrown into mayhem.

The bitter Siberian blast pushed temperatures below freezing across the country with numbing winds making it feel even colder.

Thermometers will nudge back to double figures in southern Britain by the middle of the week and temperatures will be closer to normal everywhere by next weekend but the thaw will lead to worrying rises in river levels nationwide.