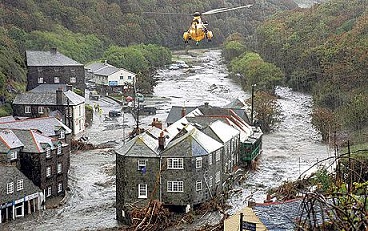 The long dry spell means that when the heavy rains hit us again they could cause far more damage than usual.

This is because the UK is now vulnerable to flash flooding which is caused when ground is bone hard dry or, ironically, already saturated with rain.

Add in the possibility that drains and gulleys have not been cleared out by councils facing huge budget cuts and you’ve a recipe for a flooding disaster.

The Met Office states: “Flash flooding happens when rain falls so fast that the underlying ground cannot cope, or drain it away, fast enough. Roads can become like rivers and if there is a lot of water it can flood buildings and carry cars away. So, if the rain is falling too fast for the ground or drains to cope there is a risk of flash flooding.

“Most rivers flow fairly gently as they slope slowly towards the sea. Therefore, when a river floods it does so quite slowly as it takes time for the rain to percolate through the ground and into the rivers and out to sea − allowing time for some warning. With flash flooding there is often very little time between the rain falling and flash flooding occurring.

“Flash flooding commonly happens more where rivers are narrow and steep so they flow more quickly. It can also occur away from small rivers in built-up urban areas where hard surfaces such as roads and concrete don't let the water drain away into the ground. This leads to surface overflow and can often overwhelm local drainage systems leading to flash flooding.”

The most dramatic example of flash flooding in the UK in recent times happened in the village of Boscastle in Cornwall on August 16, 2004, when an exceptional amount of rain fell over eight hours.

Heavy thundery showers developed over the moors to the south west of Boscastle. A small, steep river flows though the village and the thundery showers came one after another in a short space of time, over the same spot at the head of the river. There was simply too much water for this small river and the surrounding hillside to cope with and the water gushed rapidly down the steep slopes into Boscastle.

But flash floods can hit just about anywhere and at any time.