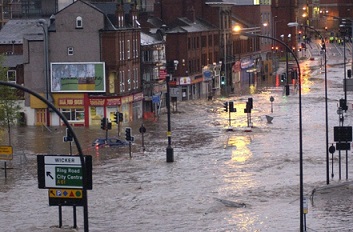 A comparison website that provides insurance quotes has revealed which is the most flood risk area in the UK.

MoneySupermarket has analysed one million home insurance quotes. Of the areas that have been most impacted by flooding - the city of Hull came out on top, reports the Daily Mirror.

Areas affected least by water damage include Luton, Dartford and Crewe where only 0.1% of all properties have previously flooded.

According to MoneySuperMarket data, the average claim for a property affected by water damage in 2017 was £4,000, while the average cost to fully rebuild a property that has been severely impacted by flooding was £180,000. The average home insurance cover, however, is £120.

Kevin Pratt, at MoneySuperMarket, said: "It’s much cheaper to install flood defences than it is to repair the damage water can cause.

“Avoiding having to claim on your home insurance will help keep a lid on your premiums and put you in line for cheaper cover when you shop around at renewal - which you should always do, no matter where you live.

“If you live in an area prone to flooding there are steps you can take to ensure that any losses are kept to a minimum and that you find the right choice for you.”

It's always hard to forecast when and where the next flooding disaster will hit, but the Government has a lot of data that can help you prepare for it.

With near 10 storms this winter alone, flooding has become a UK-wide problem - that can leave you at best, with a soaked carpet, and at worst, homeless, with a pretty hefty insurance claim.

It's caused by heavy rainfall, cyclonic weather and rising sea levels - and millions of homes are at susceptible of it.