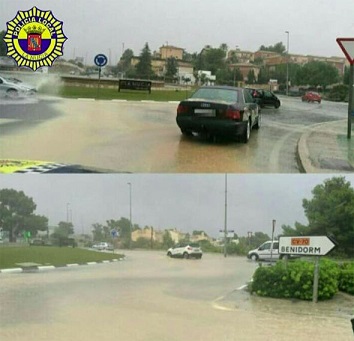 Police photo of cars being driven through floodwater near Benidorm

Think of Spain and the last thought to cross your mind would be rain.

But it’s lashing down over there at the moment causing flash flooding and wrecking holidays for those in search of some late September sun.

Benidorm has been hit with severe rain as well as thunderstorms, gale force winds and high tidal waters.

According to the Daily Express the Spanish Met Office has issued weather warnings for various areas of Spain.

Affected areas include Alicante, Murcia, Valencia, parts of Malaga and Cadiz provinces, Almeria, as well as Seville and Cordoba.

The bad weather in Spain comes as experts warn the UK could be facing four months of heavy snow, ice storms and Arctic gales.

It has emerged rising temperatures in the Eastern Pacific could soon reach threshold values for an El Nino Southern Oscillation (ENSO) to become established.

The phenomenon is known to trigger extreme weather patterns across the world and in Britain is linked to colder than average winter weather.

For more on this go to https://www.express.co.uk/travel/articles/1023556/spain-benidorm-weather-holidays-flooding