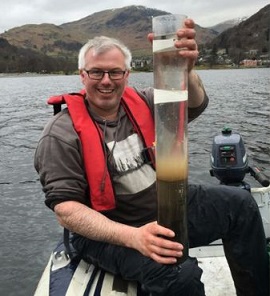 Floods that hit the north of England in 2015 and 2009 were the worst in more than 550 years … but how on earth could scientists know that?

Well, they delve around in sediment in lakes as that’s a clever way to find out just how big the floods were. It turns out that in layman’s terms the bigger the sediment the larger the flood.

A team of researchers led by the Universities of Liverpool and Southampton scrutinised the lake sediment records from the extreme floods of 2009 and 2015 – best known as Storm Desmond - and compared them with a 558 year record from the bottom of Bassenthwaite Lake in Cumbria.

A distinct layer of coarser sediment is left in the lake as material washes in from the surrounding hills and streams providing researchers with a means of recording each flooding event. Sediment layers with the largest grain sizes reflect flooding that was higher energy and more extreme in magnitude.

The results point an accusing finger at climate change and the extreme weather this is causing.

Richard Chiverrell, Professor of Physical Geography with the University of Liverpool's School of Environmental Sciences and lead author of the study, said: "The unprecedented nature of the recent phase of extreme floods accords with statements from the Environment Agency that climate changes and associated impacts on the frequency and magnitude of extreme events are one of the greatest challenges facing our society."

And he revealed that by looking into the past can give scientists vital pointers to the future.

He added: "By establishing long term flood frequency models that use both sediment records and river flow data we hope to be able to improve our ability to quantify flood risk and better support flood risk management in the UK and more widely."

Professor David Sear from the University of Southampton School of Geography & Environmental Science said: “What we have been able to do for the first time is take sedimentary records from lake beds and convert them into the kind of data used by flood risk managers.

"These are the events that cause most damage and cost to society so improving our ability to estimate their chance of occurring is important. In the UK and globally there are a large number of lakes that our research shows could act as long term flood 'gauges' opening up the possibility of new and longer records for different regions of the UK and the world that together could help us better understand changes in flood hazards."

Local authorities nationwide have warned they don’t provide sandbags when flooding is forecast so people in areas vulnerable to flooding need to take measures to defend themselves.

One of the most popular ways is to use FloodSax alternative sandbags which are space-saving to store and very quick and easy to deploy. FloodSax are transformed from being as light as a pillowcase to more effective than traditional sandbags in just three minutes and are ideal at soaking up spills as well as stopping any floodwater.

More than 2.5 million have now been sold worldwide and are available at branches of builders merchants Travis Perkins