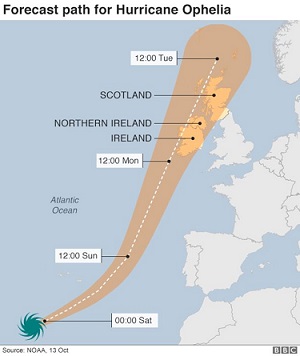 The tail end of a hurricane is set to hit the UK.

As a result of Hurricane Ophelia now out in the Atlantic, parts of England could see temperatures reach 25°C (77°F) on Sunday beating the 15°C (59°F)  average for mid-October.

The BBC reports that on Monday some areas of the UK will be hit with winds of up to 80mph (128km/h).

The hurricane will be a storm when it hits the UK, exactly 30 years after the Great Storm of 1987 killed 18 people.

On its way from the Azores in the Atlantic Ocean, Hurricane Ophelia has set the record for the most eastern category three hurricane in the Atlantic.

Western England, Northern Ireland and parts of Scotland will be most affected by the storm winds.

The Met Office in the Republic of Ireland has issued a red warning, predicting that coastal areas will be hit by winds in excess of 80mph from 9am on Monday until Tuesday.

The ferocity of the hurricane will dissipate before it reaches the UK, but Ophelia's remnants are forecast to bring high winds in coastal areas.

The storm of 1987 is often remembered for BBC Weather presenter Michael Fish dismissing reports that "there was a hurricane on the way".

Although he was right, storm winds of 100mph did batter the south of England, leaving a trail of destruction.

Eighteen people died and 15 million trees were destroyed as a result of the high winds.

It is thought that the storm caused £1bn in damage to property and infrastructure.

The Met Office has issued severe weather alerts ahead of Ophelia and has warned there could be potential power cuts, disruption to road and rail networks, and damage to buildings as a result of Monday's stormy weather.