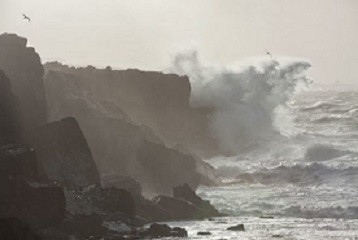 It’s a storm that has already claimed one life in the most horrific of circumstances and is now causing problems across the UK.

But where did Storm Ali come from and how did it get so much power so quickly?

The storm has formed quickly off the western coast of the UK and is localised to this country.

Its power is frightening. A woman in her 50s died after the caravan she was in was blown off a cliff in County Galway shortly before 8am today.

More than 200,000 homes are without power in Northern Ireland and the Republic, with wind disrupting travel on sea, land and air.

The reason for the storm is a low pressure cell which zipped past Ireland and Scotland early on Wednesday, swiftly deepening all the time.

This brought heavy rain, strong gale force and gusty south-westerly winds into Ireland, western Scotland and northern England in the early hours of this morning which has then spread north-eastwards into southern Scotland, Wales and north-west to south-west England through the morning.

“Between 15-20mm of rainfall is hitting south-west England, Wales and western Ireland with 20-30mm expected over Scotland but 40-60mm over parts of western Scotland with the risk of localised flooding.

“Most of the rain will clear north-eastwards in the afternoon but it will remain very windy with low pressure becoming centred to the north of Scotland.”

It’s expected to remain unsettled for the rest of this week but should be drier next week.