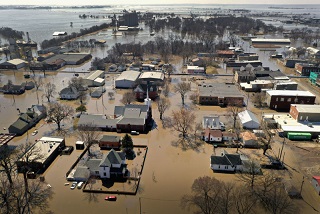 The last year has been the wettest in the USA’s history … and with historic flooding this spring and the hurricane season about to get underway the country may well smash the records again this year.

States from the Midwest to California have seen record rainfalls so far in 2019 leading to both flash floods and general flooding.

Scientists believe that climate change has increased the risk of floods and, according to online news website Earther, the Union of Concerned Scientists says there has been a 71% increase in flood warnings this year and that flood alerts have become more common in many parts of the USA since 1986.

Juan Declet-Barreto, a climate scientist with the Union of Concerned Scientists, said: “Flood alerts are society’s internal signal that people and property are in harm’s way. These factors combine to increase the likelihood of life-threatening floods such as the ones we’ve seen recently in the Midwest.”

The Earther adds: “Extreme precipitation has become more common as the planet has heated up, largely because the warmer atmosphere can hold more water. Every region of the U.S. has seen an uptick in downpours in recent decades.”

The research comes after analysis of 33 years of National Weather Service flood watches and warnings. The results show that every region of the U.S. is seeing more of these alerts.

In some states whole communities have been galvanised into action to fill hundreds of thousands of sandbags in a bid to protect their homes and businesses.

This time-consuming, back-breaking work with some anti-flood sandbags weighing up to 66lbs means many are now turning to alternative sandbags such as FloodSax which have sold more than 2.5m worldwide.

Simply douse them with water and they expand from being as light as a pillowcase to weighing 20kg (44lbs), making them easy to get to the scene, inflate and then build into effective barriers.

For more information on FloodSax (which some refer to as flood sacks) go to www.floodsax.us.com

For more on this story go to https://earther.gizmodo.com/this-springs-flooding-crisis-is-part-of-a-bigger-patter-1835092237