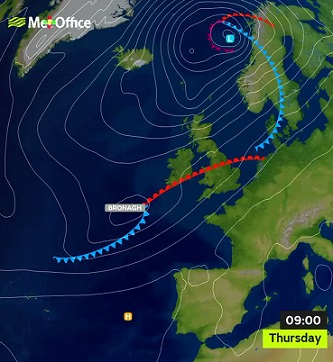 A new storm is brewing just off the coast of Britain which will batter parts of the country this evening and overnight, putting lives in danger.

The intense low-pressure system developing across parts of Wales and south west England during this evening will spread further eastwards across England.

It has been named Storm Bronagh by the Met Office.

This is bringing heavy rain throughout today (Thursday) before the winds strengthen causing gale force winds through this evening and overnight into Friday … and possibly severe gales in a few places.

Two Yellow Met Office weather warnings are in force. The first is for rain covering Wales and parts of north west England, then later in the day a yellow wind warning is also in place for Storm Bronagh covering much of England and parts of Wales.

Storm Bronagh will bring wind gusts of 45-50mph quite widely around exposed coasts and in a few spots inland, while some gusts of 60-65 mph are possible, particularly overnight into Friday across eastern England. The strong winds will be accompanied by outbreaks of squally heavy rain in places.

The Met Office website states: “There is the possibility of damage to buildings, such as tiles blown from roofs or through falling trees and branches, as well as a danger to life.”

Looking further ahead there is another weather system expected to bring more wind and rain across parts of the UK on Sunday and into Monday, with coastal areas looking likely to be hardest hit.

Meanwhile, Storm Ali - the first storm named by the Met Office this season - has now pulled away from northern Scotland into the northern North Sea after causing at least two deaths, damage and power cuts on Wednesday across Northern Ireland and the north of the UK.

Quieter conditions are currently expected to follow from early next week.