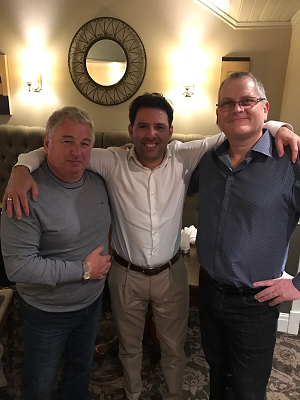 FloodSax sandless sandbags have been put to some great – and very different – uses in Belgium.

Our partner company in the country, Aquasorb, is run by Adel Oueslati who has used the pioneering invention to save an international showjumping contest, help DIY giant Ikea and a major car park chain now relies on them to deal with floods.

And Adel even spotted a problem in the basement of a care home in Belgium and sorted that out too with his FloodSax before water could have wrecked the home’s computer servers.

And with their inventive minds there will undoubtedly be some new ways to use FloodSax and some new products on their way soon.

Richard Bailey said: “Adel never ceases to amaze us with what he’s been up to with FloodSax. They come in a box so can be easily transported … but Adel certainly thinks well outside the box when it comes to deploying them.”

He even took them to a Belgium school where primary children tested that they did inflate when put in water within three minutes to become instant sandbags. Four different groups tested them to make sure the product meets its promises and then they cut them up to see the amazing gelling polymer inside that makes them work.

A top showjumping event faced being cancelled after parts of the course became waterlogged … but the day was saved by Adel.

Adel strategically placed 260 FloodSax around the sodden course on the puddles on either side of the jumps and within 30 minutes they had soaked up all the water and the three-day event went ahead.

It’s now opened up a whole new potential sports market for the product.

The biggest car park provider in Belgium – and one of the largest in Europe - now relies on FloodSax to clear up floods, leaks and spills.

Interparking has 70 car parks in Belgium – many of them multi-storeys – providing 42,777 spaces.

The Belgium Government now insists that car park companies have something to absorb anything that gets onto the car park surface and this can range from floodwater through to fuel.

The company now has 400 FloodSax sandless sandbags which it has distributed to its car parks around the country.

The car park at the Mons store is on two levels but water was pouring from the upper level into the lower one.

So they used FloodSax to surround the problem and stop the water pouring through while the problem was repaired.

And finally … FloodSax provided by Adel saved a care home from suffering thousands of pounds damage.

The computer server for the Belgium home is in the basement which was vulnerable to flooding yet had not been put on a raised floor.

The problem was spotted by by Adel, who said: “Water was actually around the bottom of the server and if it had got in the damage would have been exceptionally disruptive to the home as well as being very expensive to repair.

“We have protected it for now with FloodSax sandbags which absorb all the water.”