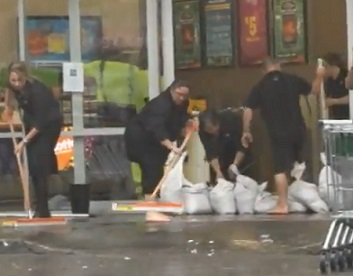 Easter looks set to be cold with a high chance of rain and snow.

The ground is already sodden so the risk of flooding is set to be high for the first week in April.

Some businesses and householders who live in flood risk areas will be prepared but many won’t and councils won’t rush to their aid with sandbags.

And as these pictures show from a supermarket the results could be catastrophic with a flooded store, damaged stock and thousands of pounds in lost trade. Staff are seen cleaning up.

The traditional sandbags in the picture also wouldn’t be that effective in keeping the water out.

Forecasters have warned the middle of next week could see a return to the colder conditions that have blasted the UK for much of March.

According to the Independent, snow is a likely possibility over the Easter weekend in higher altitude areas in the north while the chance of snowfall on lower ground has yet to be ruled out.

Temperatures could plummet as low as -10C in mountainous regions but conditions are generally not expected to be as severe as those seen during recent cold snaps.

Met Office forecaster Marco Petagna said: “It is worth pointing out that, statistically speaking, snow is more likely to fall at Easter than at Christmas.

“The general trend from Wednesday onwards into Easter is for things to be more unsettled with a chance of snow, especially in the north east on the hills.”

The Environment Agency urges people to be prepared over the coming days but warns that “sandbags are relatively ineffective when compared to purpose designed flood protection.”

Such protection includes the pioneering FloodSax sandless sandbags which miraculously transform from what resemble pillowcases to tough sandbags once they come into contact with water.