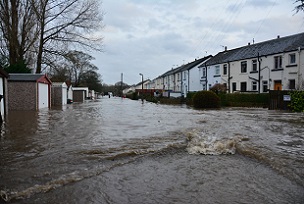 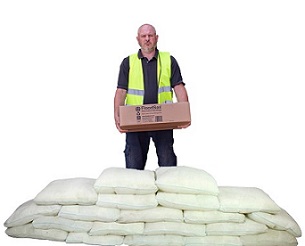 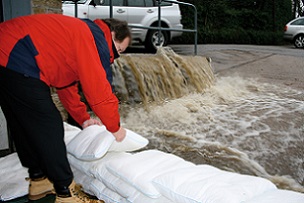 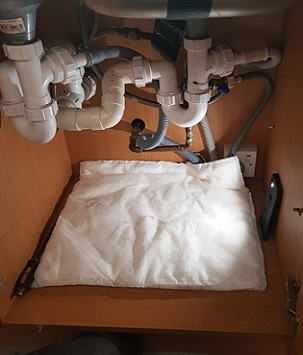 FloodSax are very flexible and in their dry state can be used to soak up internal spills, leaks, drips and floods

One in four UK properties are now at risk of flood according to new analysis.

This means millions of homes and businesses across the UK could end up with serious damage when severe weather hits their region.

The figures have been released by flood specialist research organisation JBA Risk Management. Their new UK Flood Model also reveals the annual cost of damage caused by flooding is £527m.

Areas that are worst hit in the UK by flooding include Hull, Bristol, Glasgow, Twickenham, and Slough. Other postcode districts very vulnerable to flooding are around the River Thames.

The data also shows that if people take measures to protect their own property from flooding it would make a huge difference, potentially cutting the catastrophic costs of flooding by half.

After people have been flooded they can find it very difficult to get flooding insurance which is why the Government and insurers set up an organisation called Flooding RE (https://www.floodre.co.uk/) to make household flood insurance policies more affordable.

Chief Actuary for Flood Re Gary McInally said: “Flooding presents a significant risk to the UK and is changing as a consequence of climate change, developing in complex ways that could have materially varying impacts across different communities in the UK.

“The changing climate means that access to up-to-date and detailed data will become increasingly important as organisations seek to effectively quantify and own their view of flood risk. High-quality, flexible models have a major role to play in building the understanding of that risk to inform risk management today and the building of resilience for tomorrow.”

Technical Director for JBA Risk Management Nikki Pilgrim added: “The data and recent flood events around the world are a clear warning that flood remains a pervasive risk that must be taken seriously. Our new UK Flood Model’s enhanced functionality enables the insurance market to fully understand their flood exposure – users can easily, and quickly, undertake ‘what if’ investigations based on their own needs, see the impacts on their losses, and fully understand individual and portfolio risk profiles.”

Many people don’t realise that local councils have no responsibility to provide sandbags so people have to organise their own flood protection.

The Environment Agency states: “Don’t assume the authorities will provide you with sandbags in a flood emergency. It is the responsibility of property owners to take appropriate action to protect their property from flooding. Sandbags are relatively ineffective when compared to purpose-built flood protection products. We strongly encourage people to use these products.”

Some councils now realise that FloodSax alternative sandbags are better than traditional sandbags as they are so versatile - space-saving to store and quick and easy to deploy - that they recommend them.

Gosport Borough Council in Hampshire urges its residents to use FloodSax, saying it has evaluated the bags. The council adds: “FloodSax have many advantages over traditional sandbags, being easy to store and move, easy to use and, importantly, easy on the environment, having a significantly lower carbon footprint.”

FloodSax are vacuum-packed in packs of five in easy to carry bags and four packs fit into one cardboard box weighing just 21lbs (9.5kilos)– that’s the equivalent to 20 traditional sandbags and imagine trying to lift and shift them to both store and then putting them in place when a flood is about to happen.

To deploy FloodSax as alternative sandbags when a flood is forecast or is actually happening, simply immerse the FloodSax in 20 litres of water in a large bucket or tub. If time is really critical use the floodwater itself.

The FloodSax will then expand in around 8 minutes to weigh 20kg (44lbs). A special gelling polymer inside simply absorbs the water and then keeps it in the FloodSax so it can be used for however long the emergency lasts, which could be several months.

Each row of FloodSax will keep out approximately 7 inches of water and usually two or three rows are enough to keep floodwater out.

In their dry state FloodSax are multi-purpose and flexible as they can be used to soak up drips, leaks and spills, often in hard-to-reach areas such as under sinks or even beneath floorboards.

To find out how to get hold of FloodSax go to http://www.floodsax.co.uk/buy/uk-suppliers/