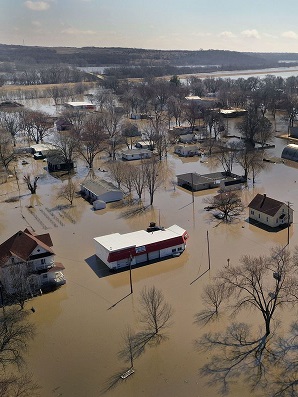 Huge swathes of the USA are reeling after severe flooding … and now it looks like more heavy rain is on its way to add to the misery.

This spring has seen torrential rainfall reaping devastation through the central and northern plains to the upper Midwest. Texas, Oklahoma and Kansas are most at risk.

The Washington Post reports: “The beleaguered central United States, already rocked by severe weather and flooding in the spring, must brace for a multiday onslaught of violent storms.

“The National Weather Service’s Storm Prediction Center declared an elevated risk of severe weather every day in its four-to-eight day outlook, covering the period from Friday to Tuesday. It marked the first time the center had highlighted such a threat over so many days in more than decade of issuing such outlooks.”

The AccuWeather website warns: “As the risk of severe weather ramps up over the central United States so will the risk of flooding all over. The same pattern poised to bring multiple rounds of severe thunderstorms will produce repeating downpours.

AccuWeather Lead Long-Range Meteorologist Paul Pastelok warns: "Some of the upcoming rainfall may overlap locations that were hit hard with flooding during the latter part of the winter and the first part of the spring. Rainfall during the period ending on Sunday night, May 19, will average 2-4 inches with local amounts to 10 inches possible in portions of Minnesota, Wisconsin, Iowa, Missouri, Kansas, Nebraska and the Dakotas.

“More storms are poised to roll in from the Pacific next week. The storms will dip southward over the southern Rockies and then turn northeastward across the Plains. This pattern will allow the storms to tap abundant Gulf of Mexico moisture and release that in the form of severe thunderstorms and torrential rainfall.

“The next storm will swing north eastward from Monday to next Wednesday. Another may follow during the latter part of next week. It is conceivable that parts of the Plains and Upper Midwest may receive 12-18 inches of rain during the second half of May alone. There is the risk of new surges of water that potentially may bring moderate to major flooding.”

FloodSax alternative sandbags have long been used in the USA to protect homes and businesses from flooding. More than 2.5 million have been sold worldwide.

They have even been used to protect homes from storm surges in the aftermath of hurricanes.