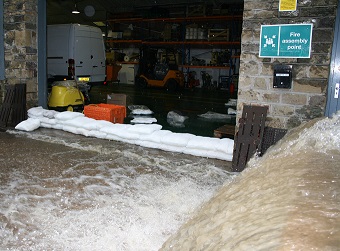 A small wall of FloodSax alternative sandbags prevented this torrent of floodwater from getting into a warehouse where it would have caused at least £360,000 damage

It’s good to see the Environment Agency’s dire warning about flooding making national news headlines – even though the £1bn figure needed every year for anti-flooding measures was revealed on the FloodSax website back in March.

The issue usually only gets aired in the aftermath of severe flooding in the UK – but in this age of relentless austerity with funding to local councils cut to the bone it’s hard to see where the £1bn a year needed for flood protection and projects in the UK will come from.

It needs to be seen as an investment that will ultimately save money. What isn’t really being reported is the fact that without this investment the damage will be far more costly. The overall benefit to cost ratio is 9 to 1 which means for every £1 spent on protecting communities around £9 in property damages and wider impacts would be avoided.

To put this into context, severe flooding early in 2014 saw water get into thousands of UK homes and businesses causing damage estimated to be just over £1bn.

The £1bn yearly investment will be needed to build traditional flood and coastal defences along with natural flood management such as planting more trees to help slow the flow of water into our rivers.

Anti-flood measures now need to be predominantly proactive with people facing up to the reality that if they live in certain areas the risk of flooding will become a fact of life which they will need to defend themselves against. Up to now most anti-flood work is often done reactively in response to a flood.

The concern over today’s news must be that this is yet another report that’s likely to provoke positive sounding words but little when it comes to ‘cold, hard cash’ to deal with it and all the while people continue to build on flood plains with the number of homes constructed there expected to double over the next 50 years. Sounds like madness as there will then be the added cost to protect these homes … and if flooding intensifies they could, in time, become impossible to sell.

Few people would deny that global warming does exist and that temperatures along with flooding are set to rise – and blog articles on the FloodSax website have long revealed that.

But tackling the problem is more than just building flood defences. It’s a complex issue that requires a whole host of organisations ranging from both central and local Government to environmentally-focussed groups such as The Woodland Trust and the National Trust to draw up schemes that will really make a difference in specific areas.

This will range from flood defence walls through to planting trees which prevent soil erosion so more water is absorbed into the ground and the flow of water down valleys is slowed.

Then there are flash floods where blocked drains and gulleys can cause homes and businesses to be swamped in minutes. They need to be cleaned out regularly.

The Government has pledged a 6-year scheme costing £2.6bn with no commitment to carrying this on in the future.

And it won’t take a mathematician to work out that this is already less than half what the Environment Agency reckons is needed and who knows what funding could be available once the 6 years are up.

Still, in the meantime, the housebuilding in flood vulnerable areas will go on with householders facing the mental and physical torment of being flooded, huge disruption to lives, massive insurance claims and the knowledge that local councils have no responsibility to come to the rescue with sandbags if the worst happens.

In short, it’s up to everyone to prepare their own anti-flooding devices such as FloodSax alternative sandbags which are space-saving to store and can be quickly deployed in minutes to keep floodwater out.

More than 2.5 million have been sold worldwide and in just one instance a wall of them stopped floodwater getting into a Yorkshire warehouse which would have ruined high technology equipment worth £360,000.

Flooding is here to stay and tackling it is a wide-ranging responsibility which includes people needing to take measures to protect their own homes and businesses.