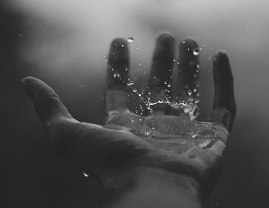 Rain hitting a hand. Photo by Geetanjal Khanna on Unsplash.

This June is set to be a rainfall record-breaker … but are the summer months really becoming wetter than the winter ones?

The recent wet weather is out of the ordinary because these rains have come in from Europe rather than the UK’s typical wet weather that is blown in off the Atlantic.

The torrential downpours and thunderstorms have been triggered by a split pattern across Europe. Blistering heat that reached the high 30 celsius across parts of central and eastern Europe collided with much cooler air over western Europe and the UK.

According to The Times: “The collision of these air masses set off some violent thunderstorms across large parts of western Europe with torrential rain, large hailstones, destructive winds, tornados and a train of deep depressions rolling up from the south.”

Looking back at statistics over the last few years it’s clear the wettest months are still those in winter – at the end of the year and the start of a new year.

According to the website Statistica, in 2018 there were approximately 147 rainy days in the UK. The greatest number of rainy days over the last 30 years were recorded in the year 2000, at approximately 176 when it rained somewhere in the country every other day. In that year, the UK received an average of 1,337mm of rainfall.

The greatest measurement of rain recorded was in December 2015 when there was approximately 219mm of rainfall and included the terrible Boxing Day floods. The lowest level was in September 2014 when it hardly rained at all.

The month of June can be tough to predict. There was only 35.4mm of rain last year but 110.6mm in 2017 and this year the tally will be well over that and is certain to be a record breaker. Bookies have stopped taking bets that this month will set new records after having to slash the odds a number of times already.

Ladbrokes were offering odds of 1/5 for June to be the wettest on record until betting was recently suspended.

So, with rainfall on the rise it’s best to be prepared for flooding 24/7. One proven anti-flooding device are FloodSax alternative sandbags which are space-saving to store and easy to deploy. Once they come into contact with water they inflate to weigh 20kg (44lbs) which makes them more effective than traditional sand bags at keeping floodwater out.