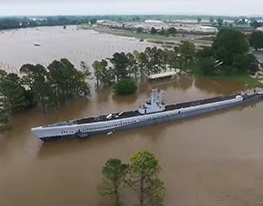 Flooding in Oklahoma has caused the historic World War II submarine USS Batfish to refloat once again nearly 50 years after it was dry docked in a park along the Arkansas River.

Is climate change to blame for the severe flooding we have seen in the USA?

The heavy rains which have brought devastation to large parts of the USA are being blamed on climate change.

An astonishing 2ft of water has fallen in parts of the lower Ohio and Mississippi river valleys in recent months with some areas being deluged by more than 40 inches of rain.

Flooding in Oklahoma even caused the historic World War II submarine USS Batfish (pictured) to refloat once again nearly 50 years after it was dry docked in a park along the Arkansas River. She sank several ships and is credited with sinking three Japanese Navy submarines in just 76 hours in February 1945.

The National Climate Assessment in the USA – an organisation made up of over 300 experts who summarise the impact of climate change on the USA now and in the future - has revealed that from the early 1990s to the mid 2010s very heavy rainfall  in the Midwest has increased by 37% - that’s well over a third.

The National Climate Assessment  states: “Winters are generally shorter and warmer. Rain comes in heavier downpours.  Residents of some coastal cities see their streets flood more regularly during storms and high tides. Inland cities near large rivers also experience more flooding, especially in the Midwest and Northeast. Insurance rates are rising in some vulnerable locations and insurance is no longer available in others. Scientists who study climate change confirm that these observations are consistent with significant changes in Earth’s climatic trends.”

The results are now being dramatically seen across America’s heartlands. All of this year's flooding is due to both early spring snowmelt and seemingly endless rain.

In Oklahoma all 77 counties have now declared a state of emergency and The Department of Emergency Management says it's because of "flooding, severe storms, tornadoes, and straight-line winds that began in April."

Tulsa Mayor G Bynum warned his city to "prepare for the worst case scenario that we've had" in the city's history of flooding.

Water-soaked counties in far southwest Iowa are seeing more floodwaters badly affecting highways, farmland and homes as heavy rains continue to fall. There is flooding in at least eight states along portions of the Mississippi River due to relentless, record-breaking spring rainfall.

According to the National Weather Service the flooding is the longest-lasting since the Great Flood of 1927. Weatherwise magazine called that "perhaps the most underrated weather disaster of the century" which claimed hundreds of lives and forced hundreds of thousands of people to flee their homes as millions of acres of land and towns went underwater.

In Iowa, several feet of water remains over roads, in homes and across farmland in that corner of the state. More water continues to come through broken levees that have yet to be repaired since the flooding began in early March.

Filling sandbags to try to keep the floodwater out of homes and businesses is a back-breaking task which is why alternative sandbags called FloodSax (www.floodsax.us.com) are now widely used in the USA. They are really quick and easy to store and deploy and inflate on contact with water to become even better than traditional sandbags at keeping floodwater out. More than 2.5 million FloodSax have now been sold worldwide.