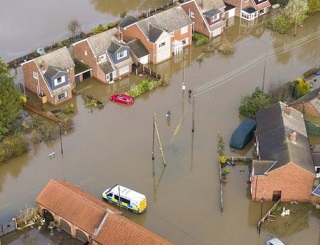 Why is insurance such a nightmare for flood victims?

Being flooded is one of the most traumatic events that can happen to you in life.

It brings misery, trauma, months living away from home and huge repair bill. Most believe their insurance company will pick up the bill but many in the badly flooded area of Fishlake near Doncaster have discovered to their horror that they aren’t covered.

According to the Daily Mail one of them is father-of-two Andy Beaglehole who has lived in his three-bedroom bungalow in Fishlake since 1997. He says he only realised he wasn't covered for flooding after calling his broker to find out if he could make a claim and now realises he will have to somehow pay the £45,000 repair bill himself. Some people in the area have bought insurance policies which specifically exclude claims for floods to make them cheaper.

Mr Beaglehole, 56, said: “I'm devastated. The floors, the brand-new carpet, the boiler, the furniture — everything will need to be replaced. The flooding is bad enough, until you find out about all of this and realise you’re on your own.”

Around 1,800 properties are estimated to have flooded across the North. More than half are in towns and villages around Doncaster. The resulting damage is expected to cost the insurance industry between £80 million and £120m, according to PricewaterhouseCoopers (PwC).

In 2015, Cumbria, Lancashire and parts of southern Scotland were hit by the most extreme flooding on record in the UK. It was the latest in a series of floods that left many homeowners unable to insure their properties or facing unaffordable premiums.

Insurance service Flood Re was introduced in 2016 to fix this. It is designed to help insurance companies offer cheaper quotes and cover those who previously could not get insurance in flood-risk areas. Insurers can pass on the flood risk part of a customer's policy to Flood Re once the cost has exceeded a certain level.

When a policyholder makes a claim, they will still have it managed by their insurer, but the insurer will be able to recover its costs from Flood Re. The initiative is funded by a £180 million-a-year levy from insurers, for which regular policyholders pay through slightly higher premiums. It means most households should be covered for flood damage as standard if they buy insurance.

But businesses are not eligible for the scheme and homes built after 2009 are also excluded as the Government does not want to encourage developers to build in high flood-risk areas knowing they would be backed up by Flood Re.

That means more than 1.7 million UK households are ineligible.

So the advice is that people should always read the small print on their insurance documents and make sure they are covered for flooding. Also invest in anti-flood devices such as FloodSax alternative sandbags – and more than 2.5 million FloodSax have now been sold worldwide.

The best place to look for anti-flood devices is on a website run by the charity the National Flood Forum. There it has a list of products in a directory known as Blue Pages http://www.bluepages.org.uk/

You can see if you live in a flood zone at www.gov.uk/check-flood-risk