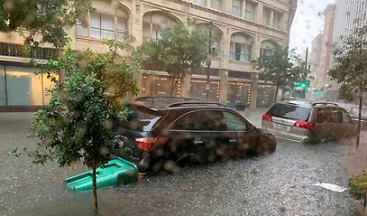 New Orleans is facing a weekend of potentially deadly weather which could spark a humanitarian crisis.

The city is remembered for being devastated by Hurricane Katrina in 2005 which claimed more than 1,400 lives.

Tropical Storm Barry, which is currently moving over the Gulf of Mexico, is likely to develop into a hurricane and hit the city later today (Friday) which is bad enough but New Orleans has already been hit by thunderstorms and flash floods this week and on Wednesday morning alone the New Orleans metro area was hit by as much as eight inches of rain in just over three hours. Some streets were flooded up to 4ft deep.

A state of emergency is already in effect and residents in some low-lying areas have been asked to evacuate amid fears the Mississippi river could come dangerously close to overtopping banks shielding the city. Experts are worried it could rise as high as 20ft (6m) above sea level, potentially exceeding the 20-25ft levees which are supposed to protect the river from overflowing.

Hurricane Barry is expected to reach landfall in the delta of the Mississippi River today with up to 15 inches of rain set to be dumped along the Louisiana coast and parts of Texas today and tomorrow.

Storm surges are expected to see rivers and tides crest at levels far higher than average which will be made far worse as there are already abnormally high levels of water in the Mississippi which is swollen from months of above-average rainfall. Weather experts warn that the storm could produce tornados along southern portions of Louisiana and Mississippi.

New Orleans Mayor Latoya Cantrell said: "We cannot pump our way out of the water levels and the waterfalls that are expected to hit the city of New Orleans."

Homeowners and businesses need to protect themselves from the flooding with devices such as FloodSax alternative sandbags which are highly effective at keeping water out and also soaking up leaks and spills inside. More than 2.5 million have been sold worldwide and they proved themselves in action in major weather incidents such as Hurricane Sandy in 2012 which struck the Caribbean, north east USA and Canada.