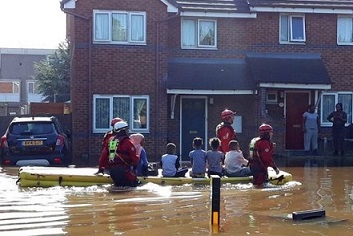 It may be the height of summer with no rain in sight … but this serious incident in Birmingham shows that flooding can happen anywhere at any time.

Around 100 homes were affected when one of the city’s largest mains in the city burst sending a huge torrent of water into the air.

It was so bad that even in this landlocked city many people had to be rescued by boat and roads were left badly damaged.

Engineers worked through the night to repair what water company Severn Trent described as "one of the largest" mains in the city.

At its deepest the water was waist-high for residents who had to wade through it to escape their flooded homes.

One of them, Hubert Henry, told the BBC: "I heard the rush of the water and thought it was rain, but then thought 'how could it be rain?

"It was gushing into the air about 6ft or 7ft. I couldn't believe how quickly it was rising. I thought this is getting serious."

Mr Henry looked out of the window and discovered his whole house was surrounded.

"It started creeping under the door and then I just heard a big gush," he said. "Bricks were being carried down the road and all sorts."