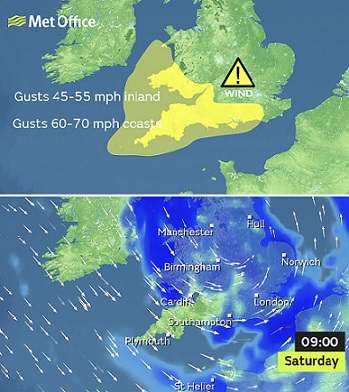 THE UK is set to be battered by a storm this weekend … and the heavy rain and strong winds could lead to flooding.

Storm Hannah follows a dry spell which means when the rain hits bone-dry ground it’s less likely to soak in and there is a higher risk of this leading to localised flooding.

It also means water is likely to find its way into buildings needing repairs as the high winds power the rain through small holes caused by displaced roof tiles, punctured flat roof coverings or damaged windows.

Many facilities management companies now have a store of FloodSax sandless sandbags so they are ready for any emergency. They can be quickly deployed to build into walls to keep floodwater out but, perhaps more crucially, can be placed below potential leaks especially in hard-to-reach places where they will soak the water up and stop expensive water damage.

FloodSax spokesman Richard Nikolic said: “We often find that when storms and gales hit they show up parts of buildings which may have slight damage or need repairs and the water often finds its way in, powered through small gaps by the high winds. This can ultimately lead to serious damage which is why many facilities management companies now have FloodSax so they can respond to such problems 24/7.”

The Met Office has today (Friday) issued a yellow wind warning for the areas most likely to be affected – mainly Wales along with central and southern parts of the UK.

Met Office chief forecaster Frank Saunders said: “A low-pressure system will sweep in from the west during Friday evening and Saturday bringing strong north-westerly winds to Ireland and then parts of the UK.  We have issued a yellow wind warning for parts of the UK where we’re likely to see inland gusts of 45-55mph and stronger gusts of around 65-75mph in exposed coastal locations.”

The Met Office says the UK has been shielded from Atlantic weather systems by the large blocking area of high pressure which extended across northern Europe, including the UK, over the Easter holiday. This area of high pressure has broken down allowing these systems to batter the UK so tomorrow (Saturday) will see showers or longer spells of rain for many.

Frank added: “We’re going to see an unsettled period over the next few days.”