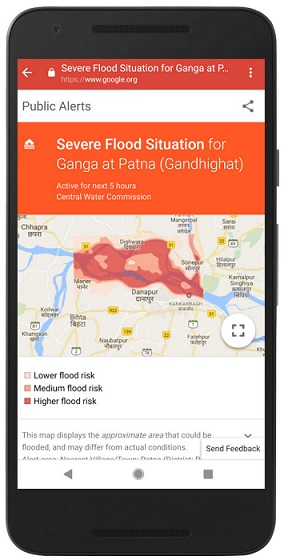 India suffers a huge toll in flood deaths every year so now Google is setting up a way to warn the country’s vast population where flooding is likely to happen.

The search engine giant is to use artificial intelligence algorithms to identify where floods are likely to break out and then alert people nearby. Google has acted after it was revealed that 20% of flood-related deaths worldwide happen in India.

According to the News 18 website the project is part of Google’s new programme called AI for Social Good and the early warning system has been in testing since last September.

At the time, Google had partnered with the Central Water Commission to get the data they needed to roll out the testing for the early flood warnings. This was first done in the Patna region, and the first alert went out in early September after heavy rains lashed the region.

He added that data from historical events, river level readings, terrain and the height of specific areas are all included in the machine learning models used to predict floods.

Yossi added: “From there we generate maps and run up to hundreds of thousands of simulations in each location. With this information we’ve created river flood forecasting models that can more accurately predict not only when and where a flood might occur but the severity of the event as well.”

For more on this please go to https://www.news18.com/news/tech/google-confirms-ai-based-flood-forecasting-will-be-available-in-india-ahead-of-monsoons-2132625.html

According to Wikipedia: “Floods cause extremely large numbers of fatalities in every country, but due to India's extremely high population density and often under-enforced development standards a large amount of damage and many deaths which could be otherwise avoided are allowed to happen.

“India witnesses flood due to excessive rain which then results in overflow of rivers, lakes and dams which adds to cause large amounts of damage to people's lives and property. In the past, India has witnessed many of the largest, most catastrophic floods, causing irreparable damage to people's livelihood, property, and crucial infrastructure.”

The country is trying to provide more flood protection for its population with hundreds of thousands of FloodSax alternative sandbags now en route to the country from the UK.

These have been designed and manufactured by West Yorkshire company Environmental Defence Systems Ltd which has sold well over 2.5 million FloodSax worldwide in the last decade.