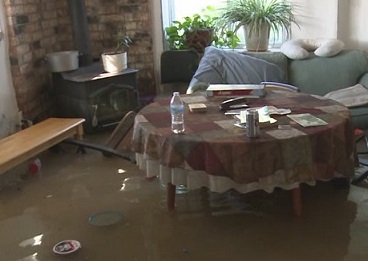 The misery of a flooded home

How flooding can have a devastating impact on mental health

A hard-hitting report has revealed how flooding can have a severe impact on people’s mental health.

A study shows that those whose homes are damaged by floods, storms or other bad weather are 50% more likely to suffer mental health problems such as depression or anxiety … and that’s even if they don’t have to move out temporarily.

New agency Reuters quotes Prof Hilary Graham, health sciences professor at the University of York which carried out the research with the National Centre for Social Research, as saying: “There’s increasing awareness that beyond these very dramatic human impacts - like loss of life - there are what official reports refer to as ‘psychological casualties’ When extreme weather harms homes, people’s mental health takes a big hit.”

The researchers discovered that mental health problems rose by about half in those whose homes were damaged by floods, storms, rain or wind. Some of that stress could be financial but a lost sense of security also seemed to be a significant issue.

Prof Graham said: “We believe in the stability of our environment, that it will be the same place tomorrow as yesterday and we derive a lot of security from that. It’s not until that security is threatened that you realise how much you rely on it. Like Joni Mitchell said, ‘You don’t know what you’ve got till it’s gone’.”

Homeowners and businesses often don’t realise that councils have no responsibility to provide sandbags if flooding is expected. They must protect themselves and one way to do this is to have FloodSax alternative sandbags which are space-saving to store and easy to deploy. It means you have peace of mind and are ready for action 24/7 to prevent a flood.