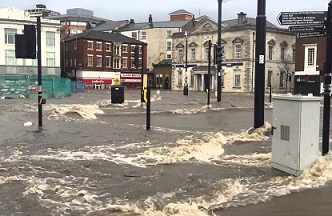 When people think of the Northern Powerhouse it’s often linked in with improvements to road and rail networks.

But the Government is now ploughing money into anti-flood schemes in the north which they say will help to protect the powerhouse.

Across the country 13 flood schemes will benefit from £40m of additional funding which will unlock flood defence schemes and help support economic growth and regeneration in areas that have suffered from flooding in recent years.

It has been revealed that five flood schemes in the north of England will receive almost half of the total funding - £17.4m - in a boost to the Northern Powerhouse.

Rochdale in Greater Manchester will receive £5m to develop one of the largest inland flood schemes in the region. The defences in Rochdale will increase the level of flood protection to 1,000 homes as well as critical infrastructure such as the tram network, a bus station, a grid sub-station and a waste water treatment works.

Eight miles to the west, £7m has been awarded for new flood defence work around the River Irwell in Bury and Radcliffe as a first step towards the development of a new £46m flood defence scheme, better protecting 870 properties. In addition to raising flood defences at key locations along the river’s edge, another key aspect of the scheme will be the creation of a wildlife habitat and recreational areas for the public by setting defences further back from the river.

Nationwide, the £40m boost will help unlock an extra £24m from other sources, enabling the flood schemes to go ahead. In total, more than 7,000 properties will be better protected against flooding, including over 5,000 homes. This additional money is part of the Government’s £2.6 billion investment from 2015 to 2021 to fund 1,500 flood defence schemes which will better protect 300,000 homes across the country.

Environment Minister Thérèse Coffey said: “This extra funding for flood defences will unlock schemes that will better protect thousands of homes and businesses against flooding, supporting regeneration in important towns and villages in the north and coastal communities.

“It will boost our resilience as a nation and help our communities to grow and prosper.”

In the historic English Channel tourist town of Weymouth, £1.2m will improve the harbour wall, reducing flood risk to 450 properties and helping to kick start the regeneration of Weymouth town centre.

More than £10m is also being awarded to a scheme to protect deprived communities in the St Austell Bay area of Cornwall. The funding will unlock an additional £4.8m of partnership funding contributions and is additional to £13.4m which has already been allocated to the scheme. The funds will support an integrated regeneration partnership project which will help to reduce flood risk and develop plans for new housing and community green space.

Over the past three years, the Environment Agency has completed more than 400 new flood schemes to better protect more than 142,000 homes. In addition to building hard defences, it has improved its response by investing in new technology and equipment like temporary flood barriers, pumps and 6,500 trained staff across the country.

FloodSax are transformed from being as light as a pillowcase to being more effective than traditional sandbags in just three minutes and stop floodwater outside from getting inside, causing untold misery and expense. They are also ideal at soaking up spills and leaks in homes and businesses, especially those in hard-to-reach places.