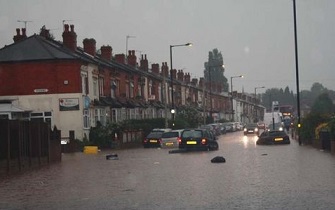 The disappearance of Britain’s front gardens may be one cause of more flooding.

With many homes now having two or even more cars many people have transformed their gardens into driveways.

So where the floodwater in the past may have soaked into the garden’s grass or soil, nowadays it is hitting the hard surface of the driveway and then running into the house if the driveway has an incline that way or onto the road.

With massive Government cuts to local authority budgets, drains can be left uncleared and then the water has nowhere to run which can quickly cause serious flooding problems during torrential downpours.

Driveways are believed to be one of the reasons behind the flooding problems in Birmingham at the end of May when a month’s rainfall came down in just one hour.

Questions have been raised in the city that poor street drainage and tarmacked driveways could be contributing to flash flood problems.

Heavy rainfall on the afternoon of Sunday, May 27, caused widespread flooding misery.

According to Birmingham Live, Liberal Democrat Clr Roger Harmer said: "Our drainage systems are not designed for the water run-off we've got.

"When people tarmac over their drives or put outbuildings on the front of their homes the water arrives on the street much faster than it would usually.

"On the planning side of it when you do things to your frontages there are things you have to do to ensure there is proper drainage but the council doesn't enforce it.

"You might think one driveway won't make a difference but if you have thousands and thousands of them the accumulation will have a significant impact on the speed in which the water gets to the drain.”

General flooding can also create blockages in drains and sewers and this can lead to the backflow of sewage into properties through drain gullies, toilets and washing machine/dishwasher outlets.

If dirty floodwater is backing up through the toilet, a FloodSax rolled up and put down the toilet will stop it.