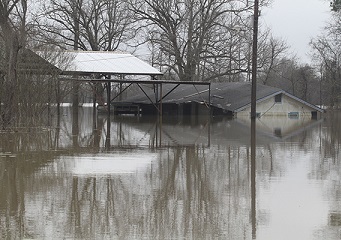 Dozens of homes were flooded after a massive wall of sandbags stretching several miles was breached in the USA.

Prisoners were even used to deploy the sandbags such is the manpower needed to carry out the back-breaking task.

The inmates joined volunteers to stack 100,000 sandbags to try to keep floodwater out of homes at Eagle Lake, north of Vicksburg in Jackson, Mississippi but sadly it was all in vain as the waters kept rising and breached the sandbag barricade.

Other products such as FloodSax alternative sandbags (www.floodsax.us.com) inflate when they come into contact with water in around 3 minutes and so don’t need heavy sand and all the logistical problems that can cause.

Officials faced a catch 22 scenario at Eagle Lake – keep water trapped in a levee system where it threatened to flood or open floodgates and allow it to drain which would have caused even worse flooding from the Mississippi River elsewhere.

According to online news website Stars And Stripes the breached sandbags led to 50 homes being flooded.

"It wiped out all our sandbags," said Earl Wallace, chief of the Eagle Lake Volunteer Fire Department.

When the backwater levee was completed it was supposed to include a pumping station to lift water from the closed-in area and release it into the Mississippi River, but the U.S. Environmental Protection Agency rejected the pump as harmful to wetlands inside the closed-in area. This year's flood has renewed the push for the pump with supporters saying the flood will make it impossible for farmers to plant more than 200,000 acres (80,000 hectares) this summer.

The sandbag collapse led to some evacuations and rescues using boats and high-clearance trucks.

For more on this story go to https://www.stripes.com/news/us/mississippi-flood-overwhelms-miles-long-sandbag-wall-1.581937