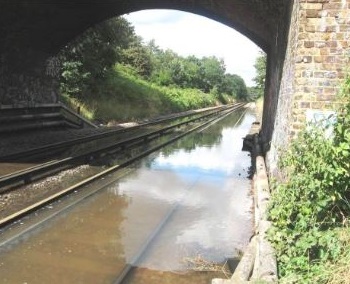 Network Rail has revealed why rain slows trains right down.

And the organisation which maintains the railway infrastructure says new homes being built alongside the tracks can make flooding worse.

They state: “When floodwater rises above the rails trains must slow down to prevent damage to the train. Flooding can cause a short circuit and cut the power if the track has a live conductor rail.

“Trackside points and signalling equipment that rely on intricate wiring and power supplies can easily fail during flooding and need to be replaced before trains can run on the track again.

“When floodwater drains away it can wash away the ‘ballast’ - the bed of stones that supports the sleepers - and this destabilises the track. To make the line safe again this ballast must be relaid.”

Network Rail – which manages 20,000 miles of track, 30,000 bridges and viaducts and thousands of tunnels, signals, level crossings and points – says many sections of the railway were built in cuttings and tunnels that are lower than the surrounding area.

They add: “Other lines sit on flat, low-lying land with limited drainage that can be overwhelmed by heavy rain. For these reasons, many of our lines can flood and this can cause serious problems for the railway.

“That’s why we’re always looking for ways to prevent floods happening in future.

“Building on land near the railway can also increase flooding because rain that previously would have soaked into the ground can run off the new hard ground and onto the tracks. To help prevent this we review planning applications for developments near railway lines to make sure the drainage systems proposed are adequate.”

Network Rail says they are quick to react to rain and flooding.

They say: “We continually monitor the weather. As soon as we receive a flood warning from the Environment Agency and Flood Forecasting Centre we send people and equipment to at-risk areas so we’re in position to act quickly.

“We deploy flood defence systems - including barriers with a membrane that seals to prevent water getting through - and inflatable barriers filled with water.

“Branches, leaves and debris in ditches and drainage systems prevent water runoff – so we clear these out both on and near the track.

“As lines are renewed in flood prone areas we install the tracks and signalling equipment at a higher level so it’s less likely they’ll be flooded.”

* Many homes and businesses now have FloodSax sandless sandbags so they are ready for it 24/7.

FloodSax are transformed from being as light as a pillowcase to being more effective than traditional sandbags in just three minutes and can be quickly built into barriers to stop floodwater getting in from outside. They are also ideal at soaking up leaks and spills inside, especially those in hard-to-reach places.