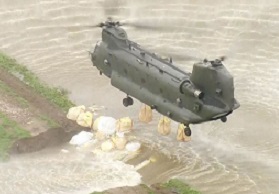 A helicopter dropping huge sand bags to try to plug a breach on the River Steeping in Lincolnshire which led to hundreds of homes being flooded.

Thunderstorms and heavy rain could deluge parts of the UK in the coming weeks … but it seems it may get drier as we go into July.

The Met Office forecast for this week predicts heavy showers and thunderstorms in the south on Tuesday and Wednesday with the north getting the downpours on Thursday and Friday.

Hopefully there will be a one-day respite from the bad weather on Saturday, June 22, but by the next day another Atlantic low pressure will bring more changeable weather with bands of rain crossing most areas at times, especially in northern and western parts. There are signs high pressure might become more dominant by the end of June with a better chance of settled and warm weather.

But there will always be the risk of some thundery outbreaks with windier and wetter weather likely at times in the northwest but there will be drier spells. Temperatures will be near or slightly above the average for the time of year.

The severe rain the UK has suffered recently has led to widespread flooding with the worst in the Lincolnshire town of Wainfleet where almost 600 properties were evacuated when flood defences next to the river Steeping were breached after a month’s worth of rain fell in just two days.

The Environment Agency described the heavy rainfall in the area as “an unprecedented event.” High-volume pumps are now lowering water levels in the town.

Councils have no responsibility to provide sandbags so one proven anti-flooding device are FloodSax alternative sandbags which are space-saving to store and easy to deploy. Once they come into contact with water they inflate to weigh 20kg (44lbs) which makes them more effective than traditional sand bags at keeping floodwater out.