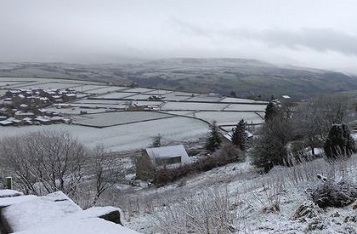 Aftermath of a sleet shower at Scapegoat Hill high above Huddersfield

The first sleet and snow of the winter is starting to hit the UK … but will this be a taste of worse to come in the run-up to Christmas?

The Met Office is predicting a cold snap with sleet and wet snow today and tomorrow and people in the south west could even face hail and thunder (Thursday).

But confusion looms as to what the weather will do in early December.

The Met Office states: “There is a lot of uncertainty in the forecast as there is the chance of either a short-lived milder spell with winds from the west or perhaps colder weather if the winds turn more northerly or north-easterly.”

Yet the forecasters feel more sure as to what will happen from December 5 to 19.

They state: “Through this period there is likely to be a continuation of cold and mainly dry weather for much of the UK, with sunny spells and a few showers. However, there is a chance that during early December the weather pattern may change temporarily, with fronts moving in from the west across the Atlantic. This would bring longer spells of rain, interspersed with brighter, showery interludes and it would also become less cold.

“However, even if this change does happen it won't be long before we have more settled weather again, perhaps by the middle of December. This would mean a return to colder conditions with overnight frost and fog more likely.”

Over the next few days the Met Office predicts that from Sunday, November 25 to Tuesday, December 4 the UK weather will be mainly cold and cloudy with relatively light winds and the likelihood of showers that could bring hill snow to the north of the UK.

The Met Office adds: “There will be sunny spells too, although the breeze will make for a marked wind chill at times. It will stay on the chilly side, with patchy frost or ice likely at night.”

* Many homes and businesses now have FloodSax sandless sandbags so they are prepared 24/7 for wet weather and potential flooding. These are transformed from being as light as a pillowcase to being more effective than traditional sandbags in just three minutes and are ideal at soaking up spills inside as well as stopping any floodwater getting in from outside.