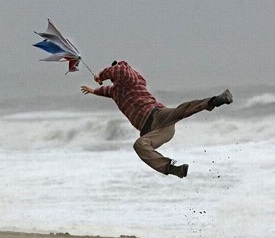 Watch out … it’s going to be wild and windy

The Met Office has just released its next long-range forecast and it’s good news for some and not so good for others.

Basically the north will see plenty of rain mixed in with some strong winds while it’ll be calmer, milder and drier in the south.

Watch out for some showers across the UK on Sunday and Monday with a warning for very strong winds on Tuesday.

Then from January 14 to January 23 the north west needs to brace itself for heavy rain and strong winds while those lucky folk in the south east can bask in more settled conditions.

From January 23 to February 6 it’s a case of more of the same with northerners (God bless ‘em) getting wet and generally blown about while those in the south enjoy bright, dry weather but with the risk of frost and fog. Snow will be most likely over northern hills, but it could fall to lower levels at times if temperatures plummet although on the whole they should be above average.

So there you have it. Time for some to think about flood protection as homeowners and businesses often don’t realise that councils have no responsibility to provide sandbags if flooding is expected. They must protect themselves and one way to do this is to have FloodSax alternative sandbags which are space-saving to store and easy to deploy. It means you have peace of mind and are ready for action 24/7 to prevent a flood.

Once FloodSax sandless sandbags come into contact with water they inflate to weigh 20kg (44lbs) which makes them more effective than traditional sandbags at keeping floodwater out. They are also great at soaking up spills and leaks inside.