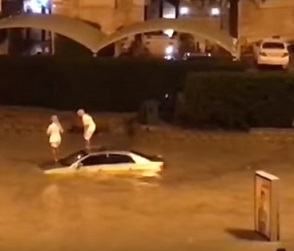 Think of Kuwait and images of almost unbearable heat and blue skies spring to mind.

https://www.youtube.com/watch?v=1Dijrf-dpy0 shows a couple hopelessly stranded on their submerged car when flash floods deluged the country.

And that’s why sandless sandbag company FloodSax has a distributor out there so people can stock up on the easy-to-store bags ready for when flooding happens.

And in March last year videos shared on Twitter and other social media sites showed people stranded in tunnels and on roads with cars engulfed by floodwater after severe flash flooding.

Flooding happens almost every year in Jeddah and other western cities in Saudi Arabia.

According to the website www.climatestotravel.com Kuwait has slightly more than 100ml (4 inches) or rain every year from November to April “which can sometimes be so intense and concentrated as to cause flooding.”