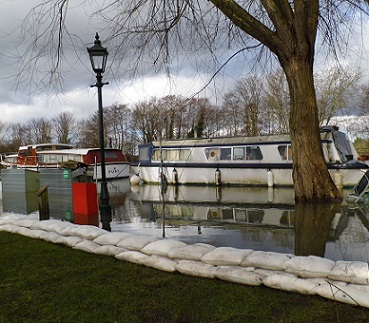 A barrier built from FloodSax stopping a river from overflowing

Flooding in the UK will be a constant threat as it was confirmed that more than 4,000 homes have been flooded nationwide so far this winter.

Now Environment Agency chief executive Sir James Bevan warned that homes and businesses will need to do more to protect themselves from the misery, trauma and huge cost of flooding.

Sir James revealed that no matter what measures the Government takes such as major flood alleviation schemes or building fewer homes on floodplains people will also need to be responsible for keeping floodwater out of their properties.

It means anti-flood measures such as FloodSax alternative sandbags which have sold 2.5 million worldwide will become a familiar sight in the future, protecting homes and businesses.

Sir James said one in six properties in England are directly at flood risk but more than two-thirds of properties and most of the population are at indirect risk.

He added: “Resilience means encouraging those homeowners and businesses which are at flood risk to install their own property flood resilience measures. They work and when a flood happens they can make the difference between being out of your house for a year or getting back to normal in a day.

“Everyone needs to know their flood risk and take some responsibility for managing it. That’s why we are working with local community groups and volunteers to ensure that the people who live in our cities, towns, villages and countryside are all better prepared to cope with flooding, know what to do when it happens, how to stay safe and reduce the risks to their homes.

“Every single flooded home or lost business is a personal tragedy. So far this winter around 4,000 properties have flooded, but our flood defences have protected another 85,000 homes from the flooding that they too would otherwise have suffered.”

Sir James concluded: “So as Dorothy says in The Wizard Of Oz, we aren’t in Kansas anymore. Welcome to the climate emergency. The patterns of weather we have seen over the last few years – more frequent and more violent storms, much higher rainfall totals, weather bombs like the one that detonated over Wales and the West Midlands last week – these are exactly what the science predicted would happen.”