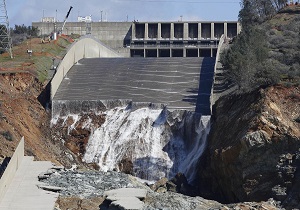 A pioneering sandless sandbag was used to help prevent massive flooding from a damaged American dam.

The Oroville Dam in California was put under extreme pressure by record rainfall.

The dam reached maximum capacity but then the spillway began to crumble, forcing engineers to use an emergency reservoir that has never been used before.

As a precaution, more than 188,000 homes were evacuated below the dam. The state Department of Water Resources at first used traditional sandbags and large rock filled bags, but with not enough people to do the laborious task of sandbagging they used FloodSax sandless sandbags instead.

Before they are activated by water to expand and become even better than traditional sandbags, FloodSax resemble large pillowcases and so are easy and quick to transport to the scene and deploy. A special polymer gel absorbs the water.

Racing against time, the California State Department of Water Resources needed to build a flood barrier wall more than 3ft high and over 100ft long to divert fast flowing waters.

And they did it by using more than 2,500 FloodSax.