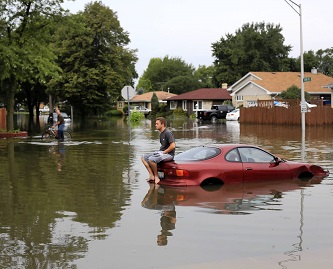 Flooding leaves a motorist stranded in Chicago. Photo from the Chicago Tribune.

Parts of an American city have been flooding for decades … and they still are with residents simply unable to afford flood mitigation devices to stop it.

The Pilsen area in Chicago is just one such suburb where people can recall their basements flooding back in the 1960s and 70s and the problem still persists.

Even though alternative sandbags such as FloodSax (www.floodsax.us.com) have proved themselves in action worldwide in areas vulnerable to flooding, in the South Side of Chicago people face the misery of flooding as a persistent problem.

According to the DePaulia news website from Chicago’s DePaul University:

“Urban flooding occurs in densely populated areas where there is not sufficient drainage area for rainfall, causing the sewer system to become overwhelmed. Water then gets forced back onto streets and into people’s homes. It’s more frequent than large scale flooding, though less visible. It causes expensive, wet problems for populations that often cannot afford an effective fix. Urban flooding is not a problem that is going away.”

In April more than 6 inches of rain fell on the city which is above average and so far in May there has been 4 inches.

a system of deep tunnels and reservoirs that captures and stores combined stormwater and sewage that would otherwise overflow into waterways in rainy weather. The water this captures is eventually pumped to a water reclamation plant to be treated before being put back into waterways. The system is still being expanded, with more reservoirs set to be complete by 2029.

But until then many people living in the poorer parts of the city remain vulnerable to yet more flooding, especially as climate change has an increasing impact on our weather, leading to more rain.

For more on this please go to https://depauliaonline.com/41665/news/potential-solutions-to-urban-flooding-not-attainable-for-communities-that-need-them-most/