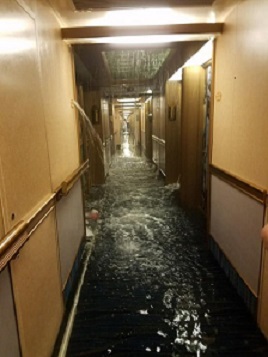 A flood on board a new luxury cruise liner shows that a deluge of water can happen anywhere at any time.

A problem with the fire suppression system caused the issue on board the Carnival Cruise Line ship Carnival Dream causing 50 staterooms to become flooded, wreaking havoc and forcing passengers to sleep on yoga mats in the ship’s spa and on the floor elsewhere.

No-one was hurt and the crew did an amazing job to sort out the problem and clean it up within six hours.

The cruise line issued a statement which said: “The water main break had no effect on the safe operation of the ship.

“The water line break occurred at 6pm and in six hours our crew had replaced hall and stateroom carpeting, dried out other sections of carpeting that were damp but did not need to be replaced and restored the 50 staterooms so that all guests could sleep in their beds that evening.

“There were a handful of guests who chose to sleep elsewhere that first night and we moved mattresses to the spa for them.”

Many homes and businesses worldwide now have a pack of FloodSax sandless sandbags so they are ready for any flooding emergency. They are space-saving to store but can be transformed into sandbags within minutes simply by adding water which causes the special polymer gel inside the FloodSax to expand.