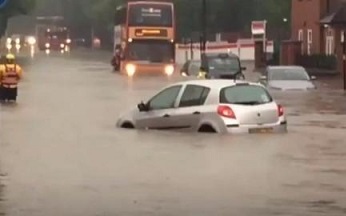 Flash flooding in Birmingham shows that torrential rain can happen anywhere and at any time even when you think you’re in for a decent summer.

More than a month's rainfall deluged parts of the city in just one hour on Sunday leaving home and business owners facing the misery and cost of having their properties flooded.

The Environment Agency has issued multiple flood warnings and alerts are in place across the West Midlands.

Met Office amber weather warnings of rain and thunderstorms are in place this afternoon for East Anglia, London and the south east and the south west.

Ironically, the south east could also experience the hottest day of the year so far.

One major route into Birmingham was left impassable because of water up to 5ft deep.