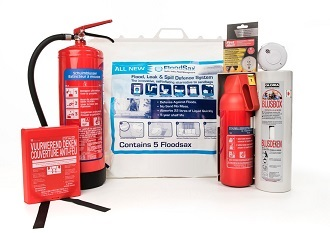 Homes and workplaces all know about the vital need for fire extinguishers … but how many are prepared for floods?

Floods cause enormous damage – on the same scale as a severe blaze.

All homes should have smoke detectors on each level of the house and some even have fire blankets in the kitchen.

And businesses must have fire extinguishers with staff trained how to use them in an emergency.

An invention called FloodSax is an instant ‘sandbag’ which is easy to store and deploy. They resemble pillowcases until they come into contact with water and then their gelling polymer expands to transform them into sandbags – but these sandbags are better than traditional ones in the way they can be moved and built into a barrier.

Almost two million have now been sold worldwide and they have proved themselves in action time and time again from  keeping floodwater out of homes during hurricanes to soaking up floods in hard to reach places. They have been deployed in hospitals after major leaks and have even been used to soak up water on an international showjumping course so a major event could go ahead.

They are devised and manufactured by Yorkshire company EDS Ltd and managing director Richard Bailey said: “People think so much about fire safety – and rightly so – yet many are totally unprepared for floods and yet a flood is possibly more likely than a fire.

“Time and time again we get calls from businesses that suddenly face a severe flood threat for help but at that critical stage it’s often too late. It’s always best to be prepared and that’s where FloodSax come into their own.”

To find out more about FloodSax and see them in action go to www.floodsax.co.uk