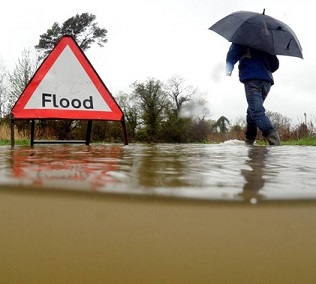 ONE UK city has been hit by flooding with more downpours expected across the country in the coming days.

Several streets in Liverpool were left awash with water after it was lashed by heavy rain on Sunday night.

According to the Met Office rain will push south eastwards today (Wed, August 15), bringing heavy outbreaks to many. Some clear spells will emerge across Scotland, Northern Ireland and northern England, with scattered showers moving in here.

Tomorrow (Thursday) rain will start across parts of England and Wales, clearing to a fresher feel, with sunny spells. There will be some scattered, possibly thundery, showers, mainly in the north and west.

The weekend will start rather cloudy and windy, with heavy rain at times, especially in the north and west.

In Liverpool on Sunday roads in Mossley Hill and West Derby were among those closed by emergency services after heavy rain hit Merseyside.

According to the Liverpool Echo both Liverpool Council and United Utilities have now begun probes into whether the roads were flooded because of drainage problems.

The Met Office said 2.6mm of rainfall was recorded at its monitors in Crosby, but added more could have fallen on other parts of the region.

Images of some of the flooded areas showed water "bubbling" - a sign that suggested possible sewer problems.

United Utilities said it believed the flooding was caused by the amount of rain in the worst hit areas.

However, a spokesperson confirmed work was underway to check whether there were any "underlying" issues.

They said: "It (the flooding) was very localised and appears largely due to the sheer volume of water falling in a relatively short period of time.”

The council confirmed it had also launched a probe centred on the flooded areas.

A spokeswoman said that, while the rain did drain, the authority would carry out a flooding investigation by checking CCTV footage and drains to determine what steps may need to be taken.