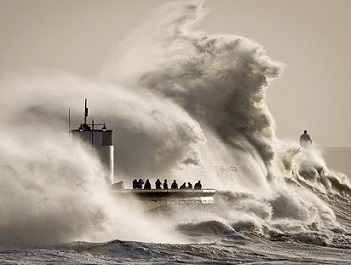 Some cracking but freak warm weather this week will come to a stormy end in some parts on Friday.

For the Met Office is forecasting very windy and wet weather for western Scotland and Northern Ireland … and parts of northern England could suffer too.

Forecasters fear Britain will be battered by 80mph winds and 100mm of rain that threaten to cause chaos for millions.

According to the Daily Mirror the weather could be severe enough for the Met Office to name it Storm Callum – and if that happens it will be the third named storm of the season.

The Atlantic storm threatens to disrupt travel, cut power and put lives at risk due to flying debris. Forecasters in the UK have cautioned that a yellow warning for wind could be escalated.

Greg Dewhurst, a forecaster with the Met Office said: "It’s not quite at the impact level that we expect for it to be named, but we’re still going to see gusts of 70mph-80mph and perhaps even higher than that across the Western Isles on Friday afternoon and evening. There is some potential for it to be escalated in the warnings categories."

In addition to damaging winds, the storm is expected to dump 80mm-100mm of rain over higher ground in Scotland, England and Wales, increasing the risk of flooding. Heavy rain will fall throughout the day and into Saturday.

The Met Office's yellow warning for wind is in place from 5am to 9pm on Friday. The strongest winds are expected across Northern Ireland during the morning and Scotland through the afternoon and evening.

The regions and local authorities affected are: