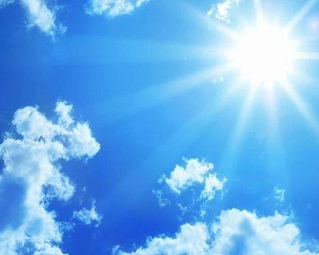 Have you ever wondered why space is black yet our sky is blue?

It’s something we just accept yet there’s an amazing reason behind it that’s all to do about how the human eye sees colour.

The Met Office explains that the sky appears blue to the human eye as the short waves of blue light are scattered more than the other colours in the spectrum, making the blue light more visible.

The Met Office adds: “Although light from the sun looks white it is really made up of a spectrum of many different colours, as we can see when they are spread out in a rainbow.

“We can think of light as being a wave of energy and different colours all have a different wavelength. At one end of the spectrum is red light which has the longest wavelength and at the other is blue and violet lights which have a much shorter wavelength.

“When the sun's light reaches the Earth's atmosphere it is scattered, or deflected, by the tiny molecules of gas (mostly nitrogen and oxygen) in the air. Because these molecules are much smaller than the wavelength of visible light, the amount of scattering depends on the wavelength.

“Shorter wavelengths (violet and blue) are scattered the most strongly, so more of the blue light is scattered towards our eyes than the other colours.”

So now you know, courtesy of FloodSax sandless sandbags for those rainy days when the blue is just a distant memory.