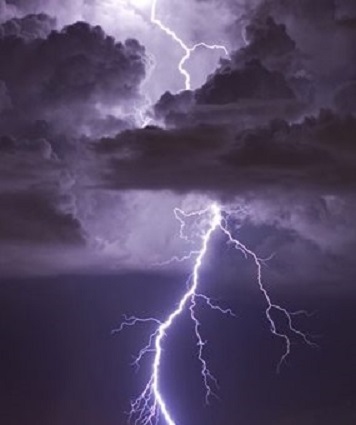 Thunderstorms could strike just about anywhere in the UK today and overnight into tomorrow.

But just what is a thunderstorm and what causes both thunder and lightning?

According to the Met Office thunderstorms develop when the atmosphere is unstable with warm air beneath much colder air. As the warm air rises it cools and condenses to form small droplets of water.

If there is enough instability in the air, the updraft of warm air is rapid and the water vapour will quickly form a cumulonimbus cloud. As the warm air continues to rise, the water droplets combine to create larger droplets which freeze to form ice crystals. As a result of circulating air in the clouds, water freezes on the surface of the droplet or crystal. Eventually, the droplets become too heavy to be supported by the updraughts of air and they fall as hail.

The negative charge is attracted to the Earth's surface and other clouds and objects and when the attraction becomes too strong, the positive and negative charges come together, or discharge, to balance the difference in a flash of lightning. The rapid expansion and heating of air caused by lightning produces the accompanying loud clap of thunder.

So, the forecast for the next 48 hours is that today thundery rain will move north across Scotland, but it will be wettest in the east with extensive low cloud. Elsewhere, after a murky start, some brightness will develop interspersed with further thunderstorms. It will be warm and humid for many and driest in the southwest.

Tonight further thunderstorms will move north across southern, central and eastern England It will be drier further west and staying warm and muggy for many.

And then the weather for the rest of the week should become hot and humid except on the North Sea coastline.

It’s always best to be prepared for flooding 24/7. One proven anti-flooding device are FloodSax alternative sandbags which are space-saving to store and easy to deploy. Once they come into contact with water they inflate to weigh 20kg (44lbs) which makes them more effective than traditional sand bags at keeping floodwater out.