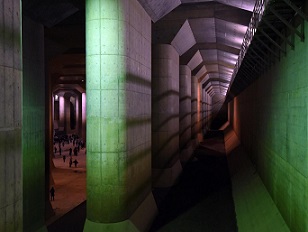 In most parts of the world people rely on a few sandbags to try to keep floodwater out.

But in Japan they have taken anti-flooding measures to a whole new level … by building an entire underground system designed to take the floodwater off Tokyo’s streets.

And, according to The Independent, it’s mind-boggling.

The cavernous underground cisterns north of Tokyo are so deep they could hold the Statue of Liberty.

Linked by tunnels that divert water away from the region’s most vulnerable floodplains, the £1.5bn underground anti-flood system is an extraordinary example of the defences that global cities are preparing as they face an era of extreme weather brought on by climate change.

Across Japan the frequency of rainfall of more than 3 inches an hour has jumped 70% which is thought to be due to global warming. Rising oceans also make the Tokyo region, home to 38 million people, vulnerable to storm surges. Wide areas of Tokyo now sit below sea level, protected by aging dikes.

Extreme rainfall, along with the potential for destructive earthquakes and tsunamis, make Tokyo and the neighbouring port city of Yokohama the riskiest metropolitan area in the world, according to a 2014 study of natural disaster risks by the Swiss Re reinsurance firm.

And they need to be prepared as Tokyo is hosting the 2020 Olympics.

For more on this go to http://www.independent.co.uk/news/science/tokyo-preparing-extreme-flooding-japan-flood-defences-global-warming-a8006416.html