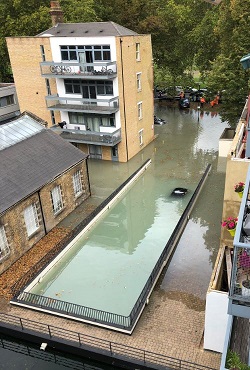 A burst water main in London caused such major flooding cars were submerged up to their roofs.

Dozens of firefighters were sent to the scene in Hackney, east London, as the floodwater rose at an alarming rate.

It began when an underground car park on a housing estate was flooded by a burst water main and the water rose up to street level, deluging surrounding roads.

The water became so deep it was difficult for some residents to leave their homes and firefighters needed to use a boat to rescue a man from a flat and a woman from a shop.

He said he was woken by the noise of a car alarm and when he looked out the window he saw the vehicle “under water with its lights flashing.”

For more on this story go to https://www.standard.co.uk/news/london/east-london-flood-children-wade-to-school-and-residents-cars-completely-submerged-after-pipe-bursts-a3952321.html