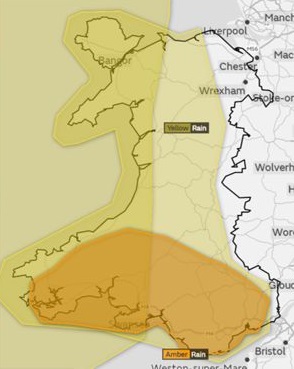 A storm now battering Britain could cause severe flooding over the weekend – with Wales likely to be the hardest hit.

Storm Callum has this morning slammed into Northern Ireland and has then moved on to Wales and the western side of England and Scotland.

Winds have been recorded as gusting up to 76mph with the chance of structural damage.

But weather experts now fear the storm will cause potentially serious flooding and the Met Office has issued an amber warning for south Wales.

Its latest ominous forecast states: “Storm Callum is bringing periods of heavy rain during Friday and continuing into Saturday. Homes and businesses are likely to be flooded, causing damage to some buildings. Fast flowing or deep floodwater is likely, causing danger to life.

“There is a good chance some communities will be cut off by flooded roads. Power cuts and loss of other services to some homes and businesses are likely.”

Met Office meteorologist Alex Burkhill told The Guardian: “We’ve got a wind warning which covers all the western side of the UK. We also have yellow and amber warnings of between 50mm and 150mm of rain for Wales. That’s quite a substantial amount of rain to come and could bring flooding.”

Sioned Warrell, duty tactical manager for Natural Resources Wales, said: “The forecast rain could cause flooding this week, especially in south and west Wales and we are urging people to prepare themselves.