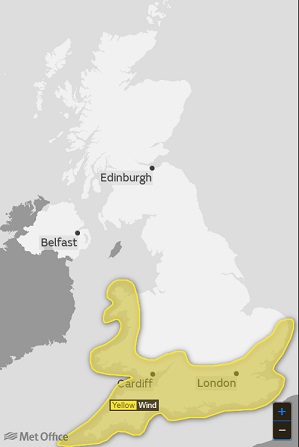 Forget Storm Ophelia … there is worse coming this week.

For Storm Brian is heading our way, will batter Britain on Saturday and will be what is known as a “weather bomb.”

The Met Office this morning confirmed the storm will go through an “explosive” development as it passes over ocean waters.

An expected fall of 24 milliards in 24 hours will give the system enough fury to warrant the term “explosive cyclogenesis” or “weather bomb”.

The Met Office says: “Some coastal routes and communities are likely to be affected by large waves with potential for flooding of properties. Some transport disruption is likely across the warning area with delays to road, rail, air and ferry transport. Short term loss of power and other services is also possible.”

The storm is expected to hit the southwest coast at around 9am on Saturday before ripping through the country during the day.

Dave Reynolds, forecaster for The Weather Company, said: “This storm is going to be large enough to affect the whole of the UK.

“The low-pressure system is forecast to come in from the southwest before moving across the centre of the country.

“We expect winds of 80mph perhaps stronger in coastal regions and although these might not be as strong as Ophelia it is important to note that many trees may have been weakened earlier in the week. It may uproot trees which survived Ophelia on Monday.”

The Government has issued warnings for wind across southern and western England between 4am and midnight on Saturday.

It warns people to prepare for “dangerous conditions.”