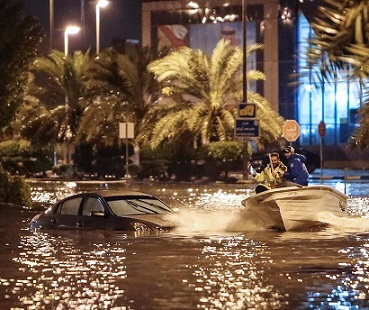 The terrible weather has claimed dozens of lives in Kuwait, a country people wouldn’t normally associate with flooding.

But a deadly storm has brought disaster and despair to the country, especially the Red Coast city of Jeddah and the Saudi Civil Defense has now revealed that 30 people have lost their lives as a direct result of the weather. Most died from electrocution in water-logged areas.

Another 3,865 people were evacuated from areas in danger of floods from more heavy downpours expected in the coming days.

Tents have been set up as temporary accommodation for 2,000 people forced out of their homes.

The weather is so awful that Kuwait International Airport 10 miles south of Kuwait City was badly flooded and has had to be closed with flights diverted to Damman in eastern Saudi Arabia and Manama, the capital of Bahrain.

It has been revealed that 138mm of rain fell on Kuwait in just 24 hours, more than it gets on an average year.

Jeddah has historically been subject to intense flooding. Floods killed 123 people in Jeddah in 2009 and about 10 people two years later.

The FloodSax are expected to be deployed at the airport and in other areas badly hit by the floods with others kept in reserve for further flooding.

FloodSax are manufactured by Environmental Defence Systems Ltd based in Yorkshire, England, and managing director Richard Bailey said: “This just shows that flooding can happen anywhere and at anytime and the terrible disasters that can be caused by torrential downpours.

“We received an urgent plea for the FloodSax on Monday from our partners in Kuwait and they are now on their way by air freight. We’ve managed to get all this turned round in record time but it’s the least we can do in such tragic circumstances.”